How Digitalization is Changing Businesses

Digitalization is taking on a large role in today’s businesses. It will determine the way future companies run and it has already changed many established organizations into digitalized versions of what were once traditional organizations. Enterprises that have adopted this digitalization are able to provide better services, faster delivery times, lower prices, and high customer satisfaction. Digitalizing can improve efficiency across all aspects of business because digitized information is easier to manage, search through, retrace, share or update regardless of whether you are using computer hardware or paper files. So how is digitalization changing businesses? Let’s find out.

Digitalization is a process that allows an organization to move from traditional operations to the use of digital technology. The transition has been going on for several decades but it can be said to have become mainstream around 2000 when internet usage started growing rapidly and businesses first felt the real need to increase efficiency.

Digitalization creates a central information system which means its users can access data from anywhere at any time, regardless of where they are physically located. It enables companies to share data, exchange ideas and coordinate work more quickly, as well as providing better customer service because customers know they will always be able to contact the business if there is a problem or query with their order or purchase. In fact, digitalization often increases profits by reducing costs – people who do not have to use paper files, for example, can work more quickly and efficiently.

There are two different types of digitalization: Hard and Soft. Hard digitalization entails creating an entirely new platform for conducting business while Soft digitalization usually involves adapting any pre-existing systems to use digitalized information. All organizations have an online presence and become digitalized whether by using smartphone apps or allowing customers to conduct transactions on websites.

The following table shows some of the ways that companies can use digitalization:

One major advantage of digitalization is the ability to connect directly with your customer and provide superior service without having too much back and forth communication. When there is more open communication between a company and its consumers, it makes both parties happy because they feel like they are receiving what they want or their money’s worth. Good examples of successful digital business models include AirBnB, Alibaba, Uber, etc. Digitalization has allowed for new business models such as subscription services where you pay monthly or yearly fees in order to use special tools or websites.

One criticism of digitalization is that it could result in the loss of jobs. Some argue that this results in unemployment which could lead to recessionary effects on society depending on how many people are affected by this change. Another controversy with digitalization is the debate over who owns shared data online between companies and their customers. There are currently no rules for private corporations, so consumers should be conscious about what they share because you never know how it will be used .

How is digitalization changing businesses?

Digitalization enables businesses to develop new marketing opportunities by analyzing consumer behavior across a range of platforms. It is also responsible for the development of new software which improves business processes – the term ‘big data’ refers to digitalized information which can be analyzed in order to discover information about consumers or companies that would otherwise not be available. Although big data often seems shrouded in mystery, firms know a lot about their customers based on previous purchases and online activity.

Digitalization is undoubtedly changing the way businesses operate – but it can also mean change for the business people, too. Organizations must make changes if they want to digitalize their information systems but employees must also be willing to change in order to make the most of digitized information. There will always be a need for physical products and services because not everyone uses technology and some people prefer dealing with people rather than machines. However all industries rely on digitalization now – and the future will see this reliance increase as we continue into an increasingly technological age.

In conclusion, I believe that digitalization is a great opportunity for businesses to change the way they operate—and it’s almost impossible not to use technology in 2021. The emerging industry of online banking, social media updates and app-based services will continue to expand into other fields in order to make life easier for consumers . It may be hard to see, but I think it’s best if we embrace this new era by building up our technological knowledge. This will give us an advantage over others who are struggling trying to catch up with the times.

Digitalization is essentially paving the way for information sharing on an international scale. Services like Skype allow users to video chat with people all around the world instantly while instant messaging has become one of the most widely used forms of communication in the world. The internet means that news, photos and information can be shared in real time between any two people who have access to a computer or smartphone–a massive change from the past where communication was much slower and required more planning.

Previous Post
Data Storage Solutions for Your Company
Next Post
Cyber Attacks: Everything You Need to Know 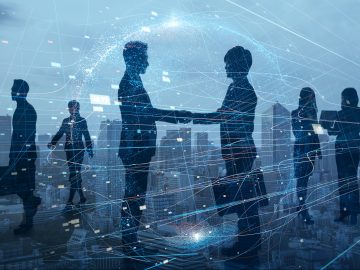