Is It Time to Get Rid of Your HDD for SSD?

To get the most out of your new laptop, upgrade your storage drive to an SSD. These high-speed drives make booting up and opening programs faster than ever. So, is it time to get rid of your HDD for SSD?

Why should I switch from HDD to SSD?

Why shouldn’t I switch from HDD to SSD?

If I upgrade my PC to an SSD, can I still use it as a storage drive for large files?

Yes. An external hard drive is often used to store more than what’s installed on your computer’s internal HDD or SSD. They’re handy because you only need to plug them into USB ports to access the data–no extra cables needed. However, they’ll be slower than an internal storage drive by comparison…and some don’t even work without being connected to a main system unit at all times. But if you have good gear, they can be very fast! Popular brands of portable drives include Adata, Apple , Buffalo , Corsair , Crucial/Micron , Dane-Elec , DataTraveler, Dell , G-Technology , Hitachi/HGST , HP , ioSafe, LaCie, Lenovo (formerly IBM), LG Electronics, Maxtor (Seagate Technology), Patriot Memory , Samsung (formerly Hyundai) and Western Digital .

When considering which type of storage device to purchase for an upgrade–whether it’s an internal HDD or external hard drive–keep in mind the kind of software you’ll be using. If it’s business-related like accounts payable documents or database records, choose hardware that can protect your data with secure passwords. If you’re considering dropping the cash on one of these devices for entertainment purposes like watching movies at home or listening to music during commutes, look for something with the greatest storage space available in your preferred price range. If you want to speed up productivity at work , it’s also beneficial to install programs on an SSD so they launch without delay when clicked, and large files open almost instantaneously.

How can I upgrade my current system?

Have you decided it’s time for you to get rid of your HDD for SSD? If you’re using Windows 7, choose a Solid State Drive that meets compatibility requirements from Microsoft . While traditional HDDs are still compatible with this operating system, it won’t read NTFS partitions properly…and that means no administrator privileges or write caching . You’ll also need to reinstall any applications if you ever restore the laptop’s factory defaults. A better idea is opting for a new computer entirely–but make sure your next purchase uses Windows 8! That’s because the system on older models can’t automatically detect an SSD. You’ll need to track down the drive’s model number and type it into Control Panel . If you’d rather replace your current HDD with a Solid State Drive, this procedure is also possible. It will require some workarounds , but there are countless tutorials available online–just do a quick Google search for your specific laptop model!

What kind of performance should I expect?

Compared to old HDDs, modern SSDs don’t cost very much. But they offer faster speeds than ever before! For example, most people using Windows 8 won’t even notice boot up times thanks to its capability of booting up twice as fast as Microsoft ‘s ancient operating system. Plus, you’ll enjoy a major speed improvement when browsing the Internet. It’s also an advantage for gamers who want to load levels quickly and avoid input lag, while software developers will appreciate the high speeds on tests like PCMark 7.

What are some advantages of using an SSD?

Unlike traditional hard disk drives that use moving parts , Solid State Drives don’t include any mechanical components–and that means they’re better at coping with shocks . If your laptop is dropped or experiences sudden head movements while you’re carrying it around, there’s less risk of HDD failure. These days, new products also come equipped with power loss protection so if anything interrupts the flow of electricity to your drive while writing data…it won’t get corrupted (and require tons of time to recover).

What are some disadvantages of using an SSD?

The biggest drawback is the price. While they’re slightly more affordable than last year, Solid State Drives still cost a lot! For example, it might be cheaper to upgrade your laptop’s RAM instead of replacing the HDD with an SDD . On average, you could probably pick up 1 GB of DDR3L 1333 MHz memory for less than $15 USD while 256 GB models can run upwards of $300 USD. Plus, if you want space beyond 256 GB, it’ll require multiple SSDs instead of one large drive–which will mean shelling out even more dough. The other issue is limited storage capacity compared to HDDs that have 1 TB or more. However, these numbers are deceptive because you can never fill up a Solid State Drive since it doesn’t use any moving components. So, do you think it’s time to get rid of your HDD for SSD?

How long will the drive last?

There’s no definitive answer to this question, but there are some factors that will affect lifespan: heat and write amplification . Heating occurs when data is constantly being written and erased from your Solid State Drive, so we recommend taking steps to lower temperatures by avoiding demanding computer games or photo editing programs. Write amplification is simply how often memory cells must be replaced, and if you’re using an SSD for heavy duty tasks like video editing…it won’t last as long as expected . It’s best used with light-medium workloads where average storage space is between 80 GB-128 GB , but you might want to consider investing in an enterprise-grade SSD if you fall into this category.

Are there any alternatives?

Yes, it’s possible to combine the cost effectiveness of HDDs with some of Solid State Drives most popular features by purchasing a hybrid hard drive. Seagate offers one called Momentus XT that has 4 GB of NAND Flash Memory for caching data, but most models are less expensive than SSDs and can store up to 750 GB. It’s also possible to use flash memory cards like SDXC or microSDHC/microSDXC, but these have lower storage capacities compared to even HDD+SSD hybrids. The biggest benefit is they’re small enough to fit inside smartphones or tablets, which makes them extremely convenient for everyday tasks like saving and transferring photos.

What happens if I need more space?

It’s very cheap to increase storage space with external hard drives, so it really makes sense to use them instead of shelling out tons of cash for an SSD . It’s very easy to relocate data from your old HDD to a new one, so you can start off small to save money and upgrade later. Plus, these days you can purchase solid state hybrid drives that offer the best of both worlds–and they’re not too expensive either! Now that you’ve read about the benefits and drawbacks: it’s time to make a decision! Do you think Solid State Drive technology is mature enough now to justify spending extra funds? Do you think it’s time to get rid of your HDD for SSD? 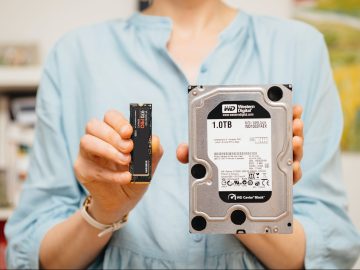